ERIC is involved in the most innovative projects. As an example, we managed the construction of the first 3S detachable cable car in France, the first 8-seater chairlift in France and also the first mixed lift, with chairs and gondolas.

ERIC believes in urban cable transport’s potential and that’s why we decided early to get implicated in this way. We have realized in Medellin (Colombia) the very first urban cable mass transit system. Since 2004 this equipment met a huge success and has transported more than a million-person monthly. It has been awarded many times and it is considered as an example by worldwide cable transport actors. ERIC took advantage of this innovation to benefit its clients.

Due to its easy implementation and ecological qualities, worldwide metropolises are nowadays interested in that type of transportation.

ERIC is actively involved in urban cable transport supporting its partners by providing its expertise and feedback.

Intensive use met by urban transports forces us to find solutions about maintenance and operation. This process is already applied to mountain lifts which are subjected to increasing service and operation costs requirements.

Thanks to our overall know-how we can provide to our clients, for winter activities, recreational activities and urban transports, the highest expertise degree. 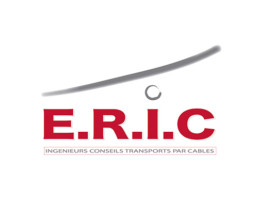